Monsieur Baucher and His Art: a Serious Word with Germany's Riders by Louis Seeger


My daughter, Cynthia Hodges, has recently published her translation of an important treatise on dressage (horse training) from German to English. The book is entitled Monsieur Baucher and His Art: a Serious Word with Germany's Riders by Louis Seeger. Karl Mikolka, former Oberbereiter of the Spanish Riding School and Brazil Olympic team coach, wrote the foreword. I did the artwork for it. 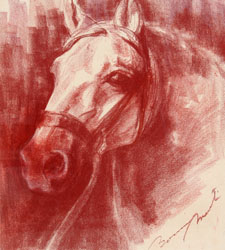 Louis Seeger was a dressage master in Berlin who trained with Max Ritter von Weyrother of the Spanish Riding School. He was also the instructor of Gustav Steinbrecht, author of Gymnasium of the Horse. Incidentally, Seeger invented the dropped-noseband, which is very popular in dressage training.

Seeger wrote this book in 1852 after witnessing what he considered to be incorrect training techniques used by Francois Baucher. He tried to warn riders that these metho
ds would be very destructive to horses' training, soundness, and well-being. He advocated a return to the Classical dressage principles. Seeger predicted some of the problems that can now be seen in high levels of competitive dressage. An excerpt will be published in an upcoming issue of Topline Ink Equestrian Journal. Cynthia also did an interview with Horses for Life, which should appear in a future issue.

The cover was designed using a red conte drawing I did as a teenager of a Lipizzaner stallion (see above). Lipizzaners are the breed of horse ridden at the Spanish Riding School.

Here is the front and back cover of the book: 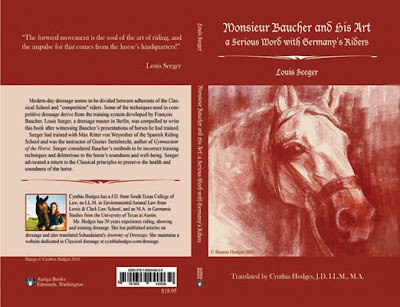 On the inside of the book, there is an image of an oil painting of a Trakehner horse I did. Trabour was one of Cynthia's dressage instructor's horses. He had been in training with Hilda Gurney, former Olympian, but the story goes that he threw Hilda and ended up on the market. Christy Garland (now Raisbeck) trained and showed him to Grand Prix dressage in Texas. 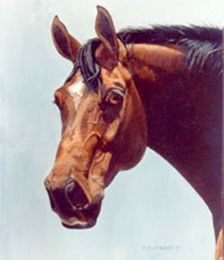 Cynthia is uniquely qualified to translate technical dressage theory books. She has a BA and an MA in Germanic Studies from the University of Texas at Austin and about 20 years riding, training, and showing dressage. She also translated Anatomy of Dressage by Schusdziarra. In addition, she has a JD (South Texas College of Law) and an LLM in Environmental and Natural Resources Law (Lewis & Clark Law School). She is in the process of becoming licensed to the Washington State Bar.

If you would like to order the translation, please see more information here or contact Cynthia at cyn (at) cynthiahodges.com.