I spent many years living in Houston, Texas, which influenced my art. Many of my paintings have a Western theme, such as still lifes of bison and cattle skulls, portraits of Native Americans and cowboys, landscapes and horses. 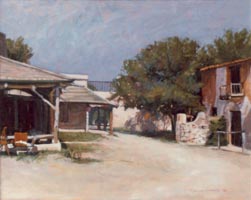 This is an oil painting of my grandmother as a young woman in Colorado Springs. 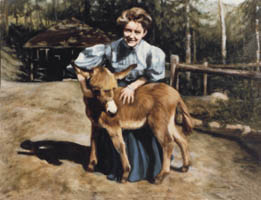 This was a gouache painting of my nephew and one of his cousins at a family reunion in Colorado. I just loved the little pony's expression. He looked sassy! 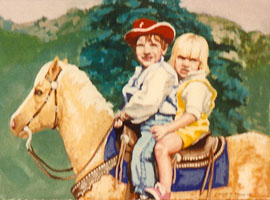 This is oil painting is of our first horse, Ibn, being shod by our farrier. 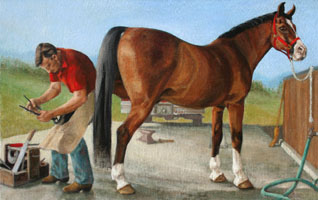 Baxter was a big leopard-spotted appaloosa that my daughter showed to Second Level dressage. Appaloosas are a breed of horse that were bred by the Nez Perce Indians in the Pacific Northwest. Baxter descended from Red Eagle, who was a famous Appaloosa stallion. 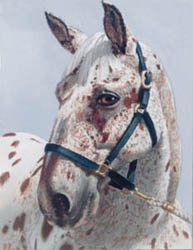 Here is another Appaloosa I painted. This was a commission I did in watercolor: 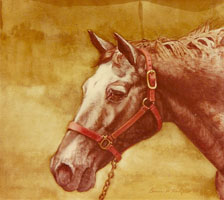 My daughter's horse, Kastanie, was a Quarter Horse mare off the track. Quarter horses are popular for rodeo riding and as ranch horses. Kastanie turned out to be a really nice dressage horse, and showed successfully to Second Level. [Please see "The History of the Quarter Horse and Its Future in Dressage"] Kastanie was so nice that she was approved for the Belgian Warmblood studbook. A young girl in Louisiana bought her as a schoolmaster. 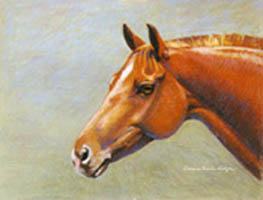 
This was a palomino gelding at our stable in Houston. I think he was a Quarter Horse, too. 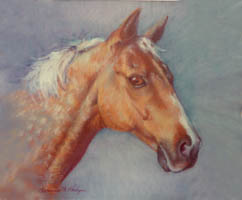 This old buckskin mare was a commission I did for her owners. She may have been another Quarter Horse. 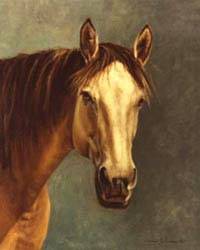 
This digital painting started out as some ink blots that I thought they looked like a horse. So, I painted an old Mustang around them. It turned out pretty successfully - it toured China in an art show through Houston Community College. It was done in Painter X. 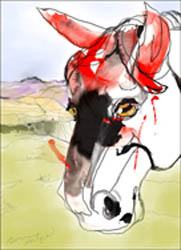 There were lots of cowboys running around in Texas! 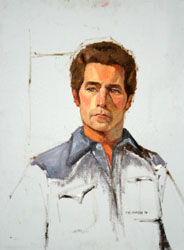 I have also done a number of paintings of Native Americans. I really respect the culture and heritage.

Champs is a Native American from a tribe in Western Washington. She is wearing her native dress of buckskin and has eagle feathers in her hair. 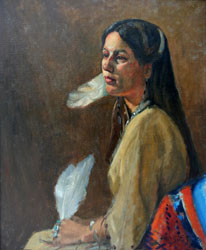 Beverly is a Native American who is wearing her native buffalo-hide dress. Her head-dress is made of pheasant and quail feathers. We think it might be ceremonial. Her necklace is made of bear claws. The medallion reflects her status in the tribe. 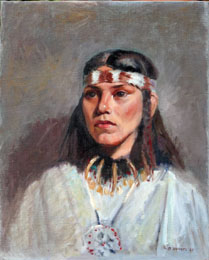 Here is another one of Beverly in a native buckskin dress. The head-dress indicates tribal membership. That might be bear fur around the bear claws on her necklace. Her status in the tribe is reflected in the medallion. 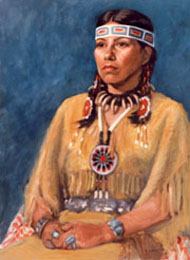 Anna is a Native American from New Mexico. She is adorned in gorgeous turquoise jewelry. Her dress is called a black manta. The belt is a tribal belt. She is holding an eagle feather. 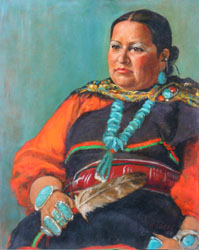 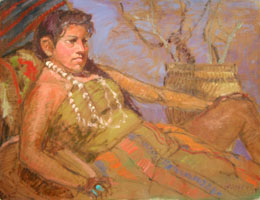 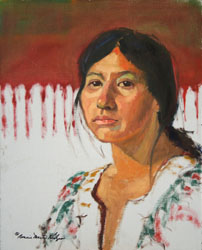 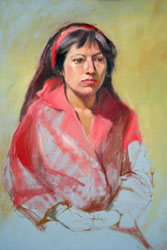 "Native American Woman in Red"
[Enlarge]
Oil on Canvas
24 x 18
Native Americans of the Plains hunted bison for survival. In the late 19th century, the bison were almost driven to extinction by white settlers. Some contend that it was a way to destroy the Native Americans - to deprive them of their food source and way of life [Source]. This is a painting of a bison that was supposedly killed by Buffalo Bill Cody. 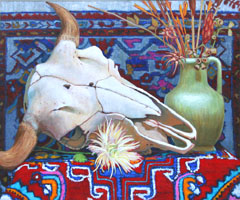 This cow was a victim of one of the brutal Texas droughts: 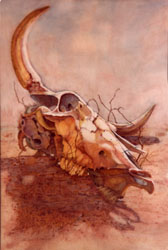 These deer were probably victims of hunters' guns: 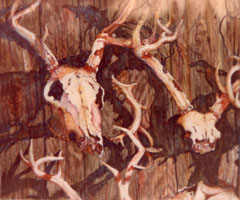 
Paintings, prints, and notecards can be ordered by using PayPal or by contacting me at artist (at) bonniehodges.com. The paintings are available as prints, even the ones that were sold.