Meet the artists: Hal Sutherland and Bonnie Hodges at Davenport Cellars in Woodinville


Meet the artists: Hal Sutherland and Bonnie Hodges at Davenport Cellars in Woodinville 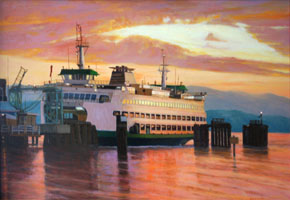 On Thursday, July 19 from 4-8 p.m., join Knight Visions Gallery at Davenport Cellars in Woodinville as they host an evening of art with artists Hal Sutherland of Woodinville and Bonnie Hodges, of Edmonds. Artwork of more than 10 artists will be showcased during the themed evening wine, art and music event in the Woodinville Warehouse Winery district.
Classically trained and animation legend, Hal Sutherland, began his distinguished career in 1954 on the film, "Sleeping Beauty", because of his passion, fascination and knowledge of horses.  His career in the genre of animation would include Harmon Studios ("Popeye" & "Bozo the Clown", "Dick Tracy"), work at True Line Studios ( "Rod Rocket" ), and then becoming the director and a co-founder of Filmation Studios with Lou Scheimer and Norm Prescott.
While at Filmation Studios, Sutherland received an Emmy for his work on the animated Star Trek series.  Filmation Studios would produce well over 50 animated shows and movies during the mid 60's-80's including the New Adventures of Superman, Star Trek, Fat Albert, The Archie Comedy Hour, Groovy Ghoulies,  Aquaman, The Adventures of Batman, The Hardy Boys, Gilligan's Island, Tarzan,  He-Man, She-Ra and so many more! After 1974, Hal Sutherland returned to Washington State to devote his time to family and a fine art career, and paints to this day...always fascinated by meeting a fellow pioneer along the way!
Bonnie Hodges is an award-winning fine artist in Edmonds, Washington. Bonnie paints landscapes, portraits, still lifes and animal portraits. She works mainly in oil, pastel, and digital media.  Her beautiful and life-like paintings have been described as an alchemy of keen sense of observation, composition and the intuitive ability to capture the entire essence of the figure she is painting.
Featured in galleries, national and international art shows, Hodge's artworks are on display in collections in the USA and Europe. Bonnie teaches oil painting for beginners at Edmonds Community College. She also accepts private students.


425-457-4957
Owned by Jeff Jirka and his wife, Sheila, Davenport Cellars is a boutique winery located on 144th Avenue in the warehouse district. It produces a variety of fine blended vintages and offers tastings every Saturday. Tours, in-house events and a wine club are also available.