Landscapes by award-winning Edmonds’ artist, Bonnie Hodges, will be on display at the Edmonds Art Studio Tour (EAST) on the weekend of September 17-18, 2011. The tour features more than 40 Edmonds’ artists in 20 local studios. 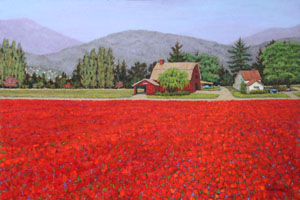 Edmonds, Washington, March 2, 2011 - The Edmonds Art Studio Tour (EAST) will be hosting its annual art studio tour on the weekend of September 17-18, 2011. The tour features more than 40 Edmonds artists in 20 studios, including landscape artist, Bonnie Hodges. The tour is funded in part by the City of Edmonds Arts Commission (EAC), which seeks to establish Edmonds as a destination for the arts.
Hodges is a relatively new Edmonds’ resident, but she is already very active on the local art scene. Inspired by the natural beauty of her new Pacific Northwest home, Hodges has captured such scenes as the Edmonds’ ferry, the Skagit Valley Tulip Festival, and Cannon Beach on canvas. Her paintings have been featured in local shows, such as the Edmonds Arts Festival Juried Gallery, the 2010 Edmonds Art Studio Tour, the Arts of the Terrace Juried Art Show, Emerald Downs Equine Art Show, Lowell Art Works in Everett, Parklane Gallery in Kirkland, and at library exhibits in Edmonds and Mountlake Terrace. Hodges teaches oil painting classes at Edmonds Community College, and has donated paintings to support local charities, such as the Edmonds Mural Society and the Louis Braille School.


For more information about the exhibit and a map of the studios, please visit the EAST website at http://www.edmondsartstudiotour.com.


About Bonnie Hodges:
Hodges is an award-winning artist in Edmonds, Washington. She holds a B.A. in Studio Arts from the University of Maryland, and worked as an illustrator for the U.S. Department of State in Washington, D.C. Her paintings have been featured in national and international art shows, competitions, on book and magazine covers, and are on display in collections in the USA and Europe.

Where: Various studios in Edmonds (see EAST map for details)